You may also contact SCE Customer Service at (800) 655-4555 for information about PSPS or other matters related to your electric utility service.

While SCE proactively de-energized portions of Moorpark as early as 2019, the City was very dramatically impacted in late 2020 and early 2021. In the largest event, from January 19-21, SCE de-energized six of the ten circuits that serve Moorpark, turning off power to 8,362 customers for upwards of 40 hours. During these disastrous de-energization events, SCE struggled to effectively communicate with its customers and communities about its operational status, making the situation even worse. SCE’s recent PSPS Post Event Reports are linked below:

In California, the California Public Utilities Commission (CPUC) has regulatory oversight of investor-owned utilities like SCE (local governments do not have regulatory authority). On January 19, 2021, CPUC President Marybel Batjer sent a letter to SCE expressing deep concerns with SCE’s execution of PSPS outages and ordered multiple SCE executives to appear before the CPUC at a public meeting to be held on January 26, 2021, and submit a Corrective Action Plan to the CPUC by February 12, 2021 explaining how SCE will improve its performance. She was specifically concerned with:

At the CPUC’s January 26 meeting (watch video), SCE officials took questions and comments from the CPUC Commissioners, local government officials (including Moorpark officials), and members of the public for nearly five hours. As ordered by the CPUC, SCE then submitted its February 12 Corrective Action Plan to the CPUC.

In addition to the CPUC meetings and February 12 Corrective Action Plan described above, SCE has undertaken efforts to prevent PSPS outages and mitigate the effects when they do occur. On March 23, 2021, SCE hosted an online community meeting (SCE advises they will soon post the video recording) specifically for the Moorpark and Simi Valley communities, which had both been severely impacted by PSPS outages. At the meeting, SCE presented key actions to improve their PSPS performance and took questions from the public. Key takeaways during the meeting include:

SCE shared the map below at its March 23 community meeting for Moorpark and Simi Valley showing the circuits that will benefit from their Expedited Grid Hardening efforts. 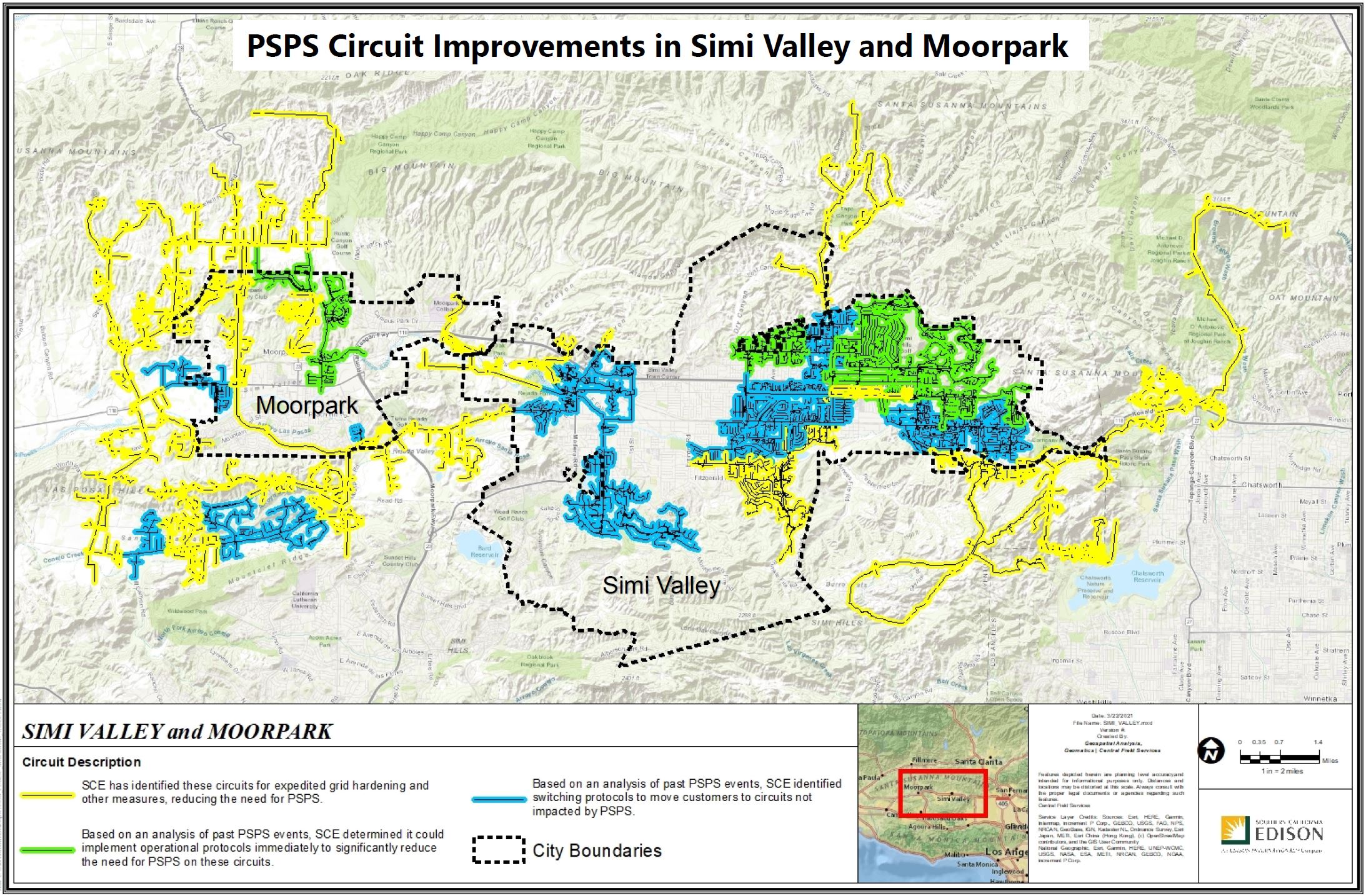 (Note: We have asked SCE for a higher-resolution version of this map and will post once received)

The City remains concerned that some affected Moorpark neighborhoods – notably Varsity Park and the neighborhoods near Moorpark College – remain subject to significant PSPS risk and will continue to push SCE and state officials to eliminate this risk.

Although the City does not have direct regulatory control over SCE or PSPS outages, City officials have been actively engaged with SCE and state legislators and regulators to address the impacts of PSPS outages on Moorpark. In 2021, City activities have included:

Additionally, because City infrastructure and facilities have also been subject to multiple PSPS de-energization events, City officials have created and repeatedly implemented PSPS protocols to ensure it can continue to provide municipal services, including police and other emergency services, traffic signals, debris removal, building inspection, and other critical services during extreme weather events and power outages.

What are Public Safety Power Shutoffs?

Over the last decade, California has experienced increased, intense, and record-breaking wildfires in Northern and Southern California. These fires have resulted in devastating loss of life and billions of dollars in damage to property and infrastructure. Electric utility infrastructure has historically been responsible for less than ten percent of reported wildfires; however, fires attributed to power lines comprise roughly half of the most destructive fires in California history. With the continuing threat of wildfire, utilities may proactively cut power to electrical lines that may fail in certain weather conditions to reduce the likelihood that their infrastructure could cause or contribute to a wildfire. This effort to reduce the risk of fires caused by electric infrastructure by temporarily turning off power to specific areas is called a Public Safety Power Shutoff (PSPS). However, a PSPS can leave communities and essential facilities without power, which brings its own risks and hardships, particularly for vulnerable communities and individuals.

Who is in charge of Public Safety Power Shutoffs?

Southern California Edison owns and operates the electrical distribution system in Moorpark (and across Ventura County) and initiates Public Safety Power Shutoffs (PSPS) when they determine that weather conditions pose an extreme risk of igniting a wildfire. The PSPS program is regulated by the California Public Utilities Commission (CPUC) and by state law. Local governments do not have any direct regulatory or jurisdictional authority over the PSPS program, although the City of Moorpark does work to mitigate impacts of PSPS power outages locally.  Please visit the below websites for more history, background, and resources for PSPS de-energization events:

Moorpark has been affected by SCE’s Public Safety Power Shutoffs in 2019, 2020, and 2021. Many times, SCE has de-energized significant swaths of Moorpark during these events, sometimes for periods of multiple days. The most recent large-scale PSPS event took place from January 19-21, during which SCE proactively de-energized six of the ten circuits that serve Moorpark, turning off power to 8,362 customers for upwards of 40 consecutive hours. The outage included most of the community’s critical Los Angeles Avenue corridor where many of Moorpark’s businesses and employers are located.

Zillow’s 2021 Mover Report: The Opportunity, Emotion and Trends Behind the Great Reshuffling

Expert panel: Expect a buyers’ market before the end of 2023

Zillow polls panel of housing experts for 2023 forecasts and beyond Metros in the South and...